I’ve heard of the Sahara, I’ve seen pictures of the Sahara, and I’ve known people who’ve been to the Sahara, but I never would have expected to go myself. But, when an opportunity arises you must snatch it out of the air as fast as you can!

My 3 roommates and I were trying desperately to find a good price for a Saharan Desert Excursion, but were failing. We decided to wait until our orientation to chat with the other volunteers to encourage more people to go.

Fortunately, EVERYONE did. We ended up getting a group of 17 people to go, and it was so nicely arranged by one of the volunteers. It ended up being cheap as chips too! $150 for 4 days including hostels, breakfast, dinner, and the actual trek.

I want to apologize in advanced, the very beginning of our trip, I (being the clutz I am) tripped and fell, cracking my camera, rendering it useless. So most of the photos are from my crap phone.

We left Thursday afternoon for a four our train ride to Marrakech. 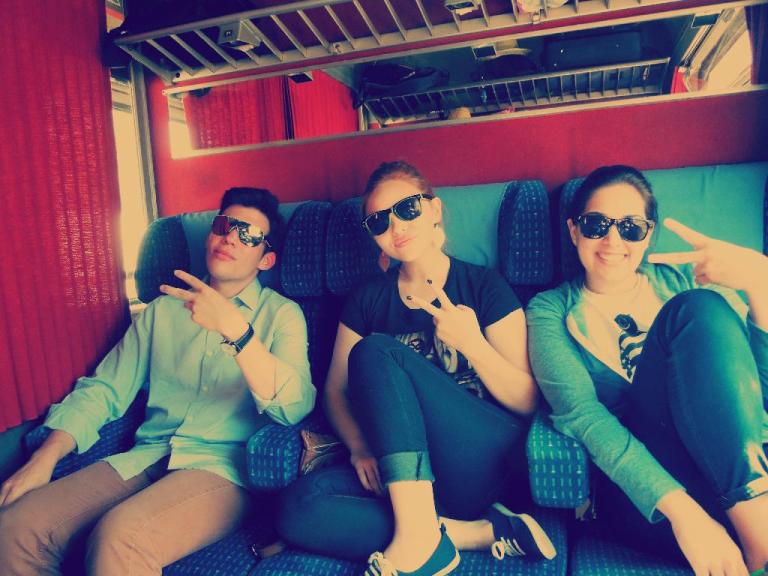 We shutter-bugged our way down Morocco, capturing a few glimpses of Africa, a place we forgot we were actually in. Morocco is so Arab yet so European at the same time, it’s hard to comprehend we’re in Africa…

We finally arrived in Marrakech, admiring the train station as we bustled past to find a cab and get to our hostel. 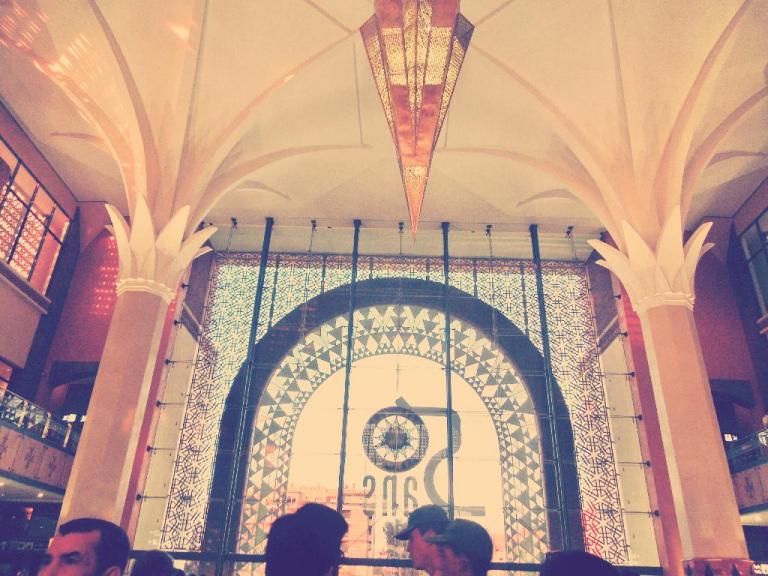 After a hurried check in and some problems with my card (my luck!) We finally got some shut eye, knowing we’d have to be up bright and early the next morning.

The next day and a half….well let’s just say that all 17 of us don’t really remember exactly what we were doing on our way out to the Sahara. There were so many stops and pictures, it was hard to keep track. So I’ll just post some up. We did, however, start by driving through the High Atlas Mountains

Excuse my makeupless face..but make up is extra weight on such a short weekend! 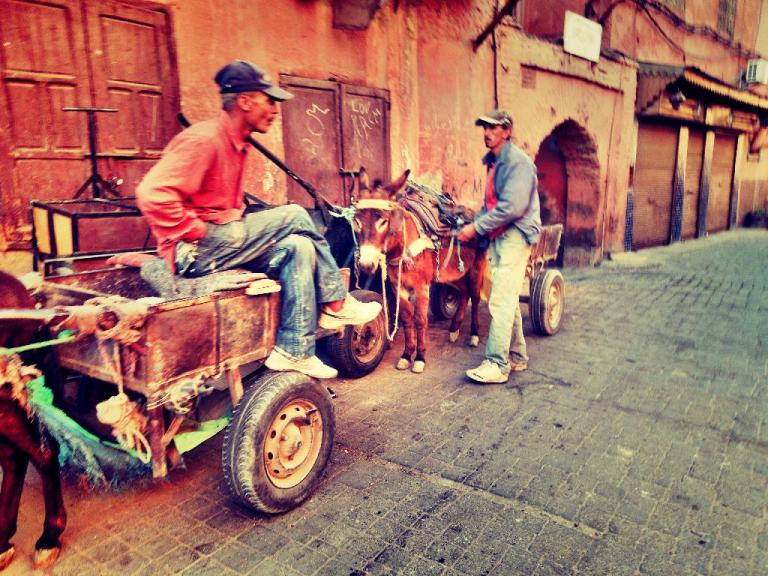 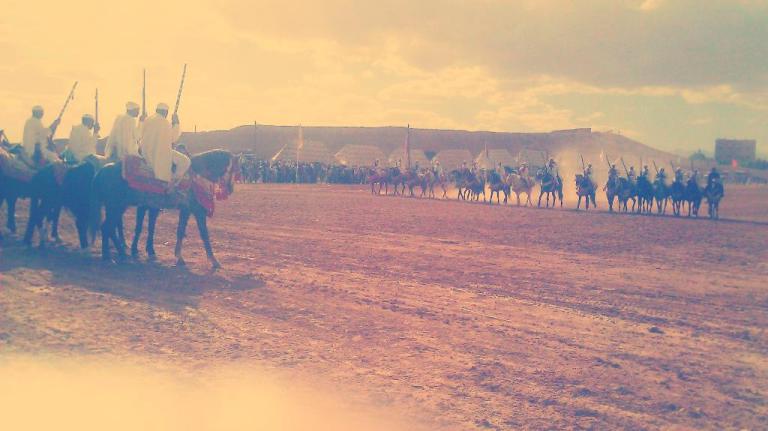 Maybe to some of you, the next picture may seem quite familiar…You see, a ton of movies were filled at this Kasbah (in practically the middle of nowhere). Some notable ones are Gladiator, Prince of Persia, and the third season of Game of Thrones. 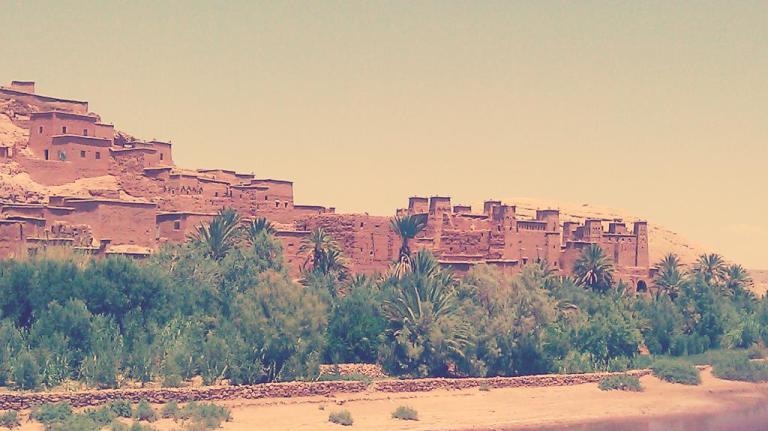 It’s a pretty sweet little city, but it was far too hot to concentrate on taking a lot of pictures, sorry!

The paintings in the background of the above picture are really cool. The ink is made from fresh herbs and either water or oil. But when it’s painted onto the paper, it all looks black, until you brush it over a flame, then the colors come out.

This is Joseph from Kenya, another volunteer. He got someone to tie a head scarf around him, and he looked pretty sick! So we all tried to learn different ways of tying scarves around our heads.. 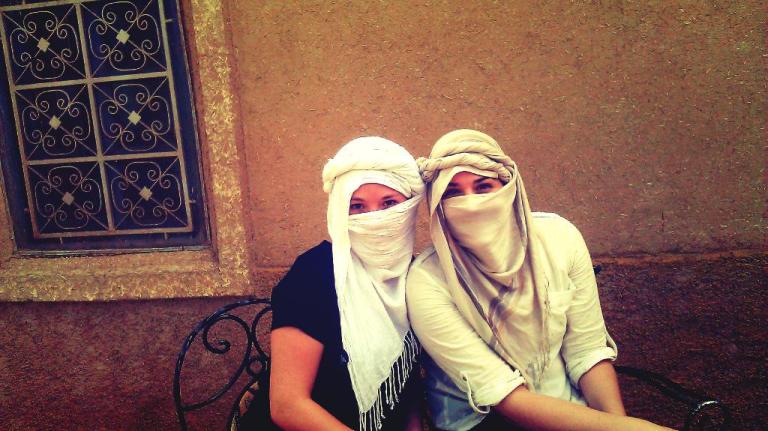 When we finally reached Merzouga, we prepped to go out to the Sahara! We had to wait until it cooled off a bit though…We got to our camels, all queued up and ready to go.

We hopped on and were off!

And then we realized that a sand storm was following us..so we wanted a picture (naturally)

Yeah, that orange behind us, it’s all sand. And then we kept going, because in all honesty, those camels are uncomfortable! 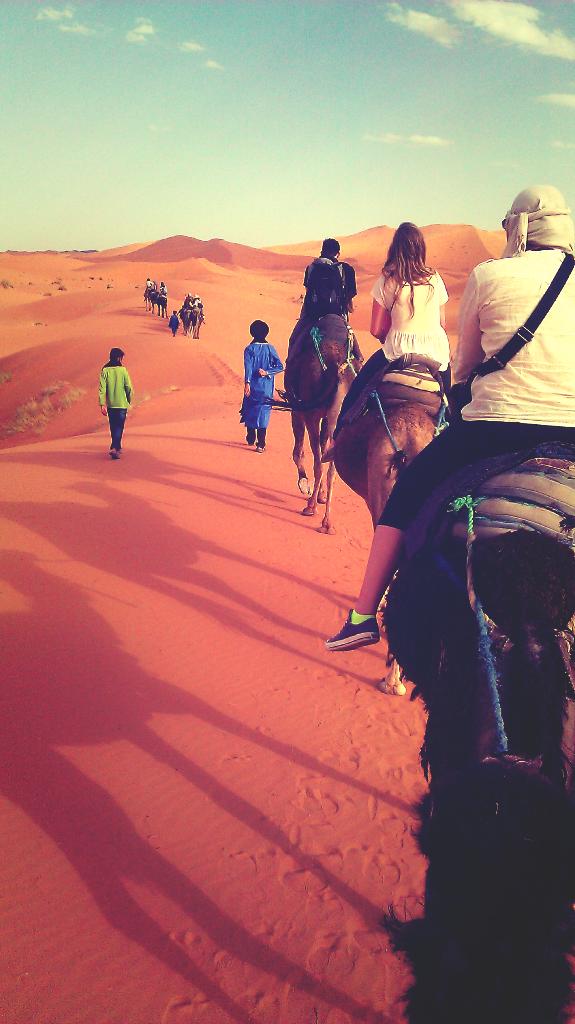 After about 30 minutes, we finally reached our camp as it was getting dark.

We sat around, relaying our amazement that we were actually in the Sahara Desert, ate dinner, and watched in a very dimly lit room a bunch of locals drumming and singing for us! Sorry..no pictures, too dark!

We were suprisingly close to Algeria. I’m sure if we rode out another 30 minutes we would have crossed the border (and probably have a hard time coming back!).

Typically, we would have had a bonfire and danced to the drums, but because of the sand storm, we were neglected that privilege 😦 In the morning, we rose early to see the sun rise. I was greeted with this site: 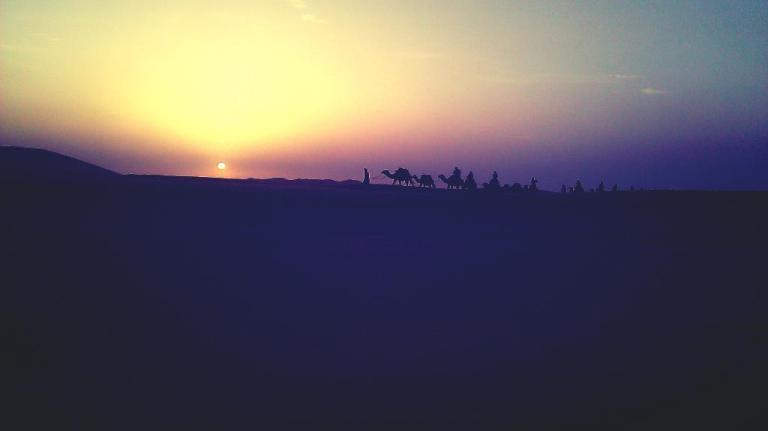 And once the sun had risen completely, and we got the sleepy late-nighters up, we trekked back to Merzouga.

Great experience. Some tips if you ever do a Saharan Desert Tour:

1. Pack a water bottle ( a liter one will do, they have water at the campsite) hat or scarf, sun screen, comfortable shoes, sandals, sunglasses and comfortable pants.

2. If you do a one night tour, make sure you have one day to get to the desert, one night, and the day to get back. All the extra days with the extra stops tend to get on people’s nerves after a while “No stopping! Just goooo!”

3. BRING TOILET PAPER!!! No matter where you stop, people are going to make you pay to wipe! No kidding. Every stop we made for a restroom break, there was always some one sitting outside of the door with the only roll of toilet paper, and they will ask for money in return. Just bring your own roll, it’s much easier!

Next week, I’ll be posting from my most favorite place in the whole wide world, London!